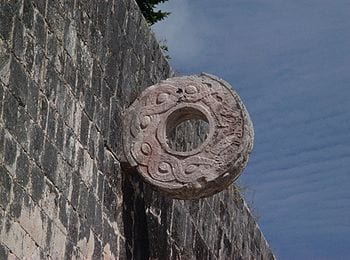 A Goal in the Ball Court at Chichén Itzá, Mexico. (Photo credit: Wikipedia)

Recently, Mexican archaeologists determined that watchtower-like structures built on top of a ceremonial ball court at Chichen Itza were made to observe equinoxes and solstices.    Researchers already knew that the Mayan ball game had ritual significance, but this revelation gives way to new understanding about the nature of the rituals.

The Chichen Itza ball court was built around 864 C.E., and so far it is the only ball court to have been discovered with towers for celestial observance.  However, there are old descriptions of people sitting on top of the walls at other Mayan ball courts, although these have usually been interpreted as “umpires” of the game rather than astronomers.