You are here: Home / Aztlan Movement / Mictlantecuhtli, the Aztec God of the Underworld 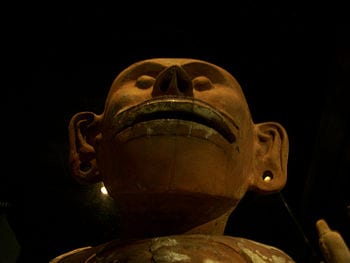 The Aztecs worshiped a broad pantheon of deities, and their god of death was known as Mictlantecuhtli.  The Aztecs believed he ruled the Mictlan, or the Aztec underworld.  They believed that the remains of humans were kept in Mictlan, and that it was a dark and gloomy place in the lower part of the cosmos.

Mictlantecuhtli was portrayed as a terrifying figure.  His statue in the Templo Mayor Museum has a ghoulish grin, and legends say that it was Mictlantecuhtli’s grin that plagued Quetzalcoatl on his journey to the underworld.  While the statue is now bald, holes on the head once held long and wavy black hair – a style the Aztecs associated with chaos.  Perhaps the most terrifying aspect of the statue is that along with depicting Mictlantecuhtli as having his flesh torn to reveal his liver falling from his body, researchers have found traces of human blood on the statue.

Source: A quick look at: Mictlantecuhtli, the Aztec god of death and lord of the underworld.