You are here: Home / Aztlan Movement / The Legend of Aztlán 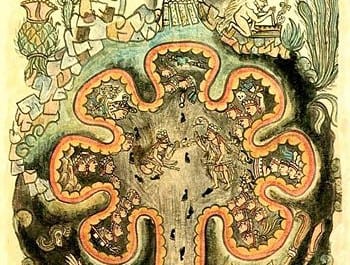 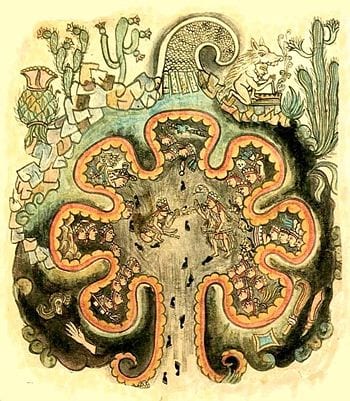 Chicomoztoc, the place of the seven caves. The mythical origin of the “nahuatlaca” tribes. From the “Historia Tolteca chicimeca”. A postcortesian codex from 1550.(Photo credit: Wikipedia)

The Aztecs and other Nahuatl people of ancient Mesoamerica all claimed to be descendents of people who migrated from a place called Aztlán.   According to Nahuatl legends, the people of Aztlán lived in “the place of the seven caves,” or Chicomoztoc.   It’s believed that the seven caves each represent a different Nahua tribe, including the Xochimilca, Tlahuica, Acolhua, Tlaxcalan, Tepaneca, Chalca, and the Mexica.

The people we call “the Aztecs” were actually the Mexica.  The name Aztec comes from the Nahuatl word Aztecatl, which means “the people from Aztlán.”  Stories describe Aztlán as a paradise, but others include tales of tyrannical rulers called the Azteca Chicomoztoca. For whatever the reason, the Aztecs left Aztlán and migrated to Lake Texcoco.  There, the built the legendary Tenochtitlan.  Today, Tenochtitlan is Mexico City, one of the most populous cities in the world at 21 million residents.