You are here: Home / Aztlan Movement / All Aboard The Moctezmua Express 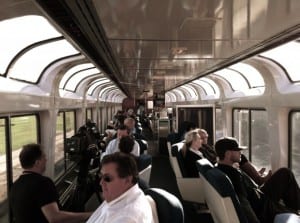 The Moctezuma Express plays a central role in the feature film

Coachella Valley and Indio are on this route just two hours from LA’s Union Station. Along the route is Los Angeles County and Riverside County housing 10 MM people. Stops along the way will be El Monte, Pomona, Ontario, Colton, and Palm Springs North.

Negotiations have begun to wrap one of Amtrak’s locomotives as the Montezuma Express similar to the King Tut Express, and provide special weekend package to the Aztlán Entertainment District.