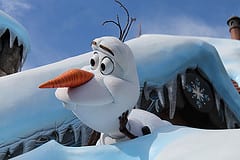 Disney’s “Frozen” took the box offices by storm and quickly became the highest-grossing animated film in history.  Now, Disney is capitalizing on that success by adding activities and attractions related to the hit movie franchise to Disney Hollywood Studios.  The new “Frozen Summer Fun Live!” attraction will recreate the fairy-tale kingdom of Arendelle for visitors.  And of course, kids and grown-ups alike are able to enjoy the award-winning music of “Frozen” in a Sing-Along Celebration, a 20-minute show that will run several times a day.