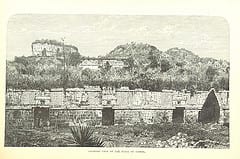 The Getty Research Institute announced last week the acquisition of an album comprising 45 photographs of Mayan sites and one photograph of the iconic Aztec calendar stone.  These rare photographs were taken in the late 1850′s by Désiré Charnay and represent some of the earliest documentation of ancient Central American cultures.

The director of the Getty Research Institute, Thomas W. Gaehtgens, stated, “These visual records of Mesoamerican architecture are an invaluable resource for scholars investigating the history of Mayan sites and the manner in which they were documented by 19th-century Europeans using the then new technology of photography,”

Désiré Charnay arrived in Southern Mexico in 1857, right in the middle of a civil war.  The French Ministry of Public Education was sponsoring his trip to document the culture of the Mayan civilization.  Mainly, he photographed sites of Uxmal, Mitla, Izamel, Chichen Itza, and Palenque.  These photographs show in detail the condition of the Mayan monuments at the time, and Charnay used these images to postulate how these sites were integrated into the contemporary Mexican landscape.