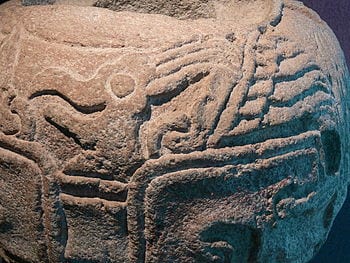 Some of the most impressive Mayan ruins are the courts on which the Mayan ball game was played.  The ancient Mayans took this sport seriously – dead serious, in fact.  The game involved a rubber ball about 20 inches in diameter, which players had to pass around without touching it with their hands.  The ball courts are massive stone constructions with inward-sloping walls.  Hanging high on on the walls are stone rings through which the players would try to pass the rubber ball.

For the ancient Mayans, the ball game wasn’t just a sport.  It was conducted with ritual importance and was attended by religious and government leaders, and religious activities often took place.  Those who won the game were awarded with a feast and hero status, but those who lost were treated harshly and sometimes even killed.