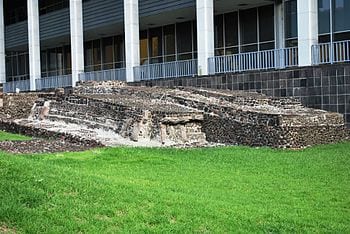 When Mexico City began excavations for a new extension of its subway system, no one knew that they would uncover nearly 100 Aztec burials.  Included in the find was a tzompantli, or display rack meant to showcase the severed heads of enemy warriors that had been sacrificed to the Aztec gods.  This tzompantli, dated between 1350 and 1521 C.E., is unusual in that it had the skull of a woman, who were not typically war captives, as well as the skull of a dog.  Researchers were puzzled by this, as until now only horse skulls had ever been found on a tzompantli.

Tzompantli or rack for the skulls of sacrifice victims on the south side of the Tlatelolco archeological zone in Mexico City (Photo credit: Wikipedia)