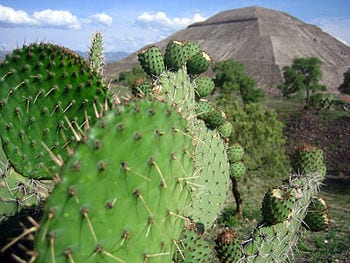 Close up of a prickly pear cactus with Pyramid of the Sun in the background in Teotihuacán. (Photo credit: Wikipedia)

If you live in the Southwestern U.S. or Latin America, chances are you’re already very familiar with the prickly pear cactus.  They grow wild across fields and even in backyards, but most of us rarely give this plant a second glance.  But to the ancient Aztecs, the prickly pear cactus was a daily food source as well as medicine.

If you’ve ever seen spineless prickly pair leaves (called nopales) in the produce section of your local supermarket and wondered why anyone would eat a cactus, the answer is simple.   This low-glycemic, high-fiber plant has been shown to lower blood sugar levels, which can help treat both obesity and diabetes.  Prickly pear also has antioxidant properties that can help reduce inflammation and deter plaque from forming on blood vessel walls.  Not only that, but both the fruit and leaves are full of non-carbohydrate polysaccharides that sooth and coat the digestive tract and help with stomach problems such as ulcers.

Modern research backs up the Aztec belief that the prickly pair research was special, so next time you’re looking to try something different in the kitchen, think prickly pear!