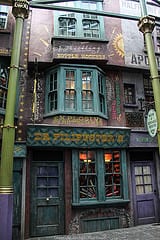 Tuesday marked the opening of the new Harry Potter attraction at Universal Orlando, and crowds of eager fans vied for the chance to experience the theme park’s new Diagon Alley expansion.  Diagon Alley, like the rest of the Harry Potter-themed park, is based on J.K. Rowling’s books and popular films. The area quickly filled to capacity, leading to staggered admissions into the self-contained attraction.  The wait time for the new signature ride, “Escape from Gringotts,” was a little more than six hours, but the fans didn’t seem to mind.  “If we could give it a standing ovation, we would,” one visitor told the press after going on the interactive roller coaster ride.

The opening of Diagon Alley is expected to provide a boost to the theme park’s revenues and to tourism in central Florida.  Comcast Corp ‘s Universal Studios will bring the world of “Harry Potter” to its Hollywood theme park in 2016, part of a multi-year revamp of its film-themed attractions.