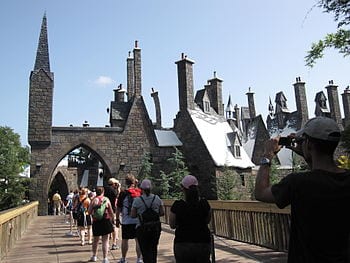 The Entrance of The Wizarding World of Harry Potter (Photo credit: Wikipedia)

Blockbuster movie franchises are being incorporated into theme parks with increasing frequency.  “The Hunger Games” trilogy is the latest to get this treatment, as CEO Jon Feltheimer recently announced a touring exhibition featuring entertainment related to the popular movie series.  Movie-themed rides are already a fixture at many parks in the U.S., but in the international market developers are rushing to meet the demand for entire theme parks based on a single franchise.  Mark Woodbury, president of Universal Creative for Universal Parks Resorts, the developers of the extremely successful Wizarding World of Harry Potter, had this to say:

“There’s a symbiotic relationship between the parks and the pictures that feed off each other.  We like the idea that there is some blockbuster history behind these adventures.”