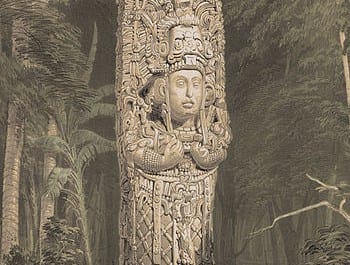 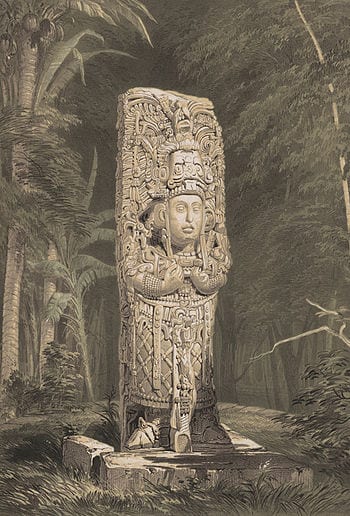 Lithograph of Stela at Copan, Published in 1844 by Frederick Catherwood in Views of Ancient Monuments in Central America, Chiapas, and Yucatan . : Note: This drawing depicts Stela H. It is of Waxaklahun-Ubah-K’awil in the role of the Maize God. Source: Linda Schele & Peter Mathews, The Code of Kings: The Language of Seven Sacred Maya Temples and Tombs, p. 154 (Photo credit: Wikipedia)

Mayan hieroglyphs are complicated and unique.  Unlike most civilizations that used symbols and pictographs to communicate language, the Mayan writing system does not appear to draw from any other culture.  Instead, these symbols are original to this Central Native American people.

Mayan symbols and hieroglyphs were discovered by the West by John Lloyd Stephens and Frederick Catherwood in 1839.  Catherwood’s drawings of his and Stephens’ discovery still fascinate those interested in ancient Mayan culture. The two meticulously recorded the symbols, but it wasn’t until 1973 that the symbols’ meanings began to be understood.  Experts found that like Egyptian hieroglyphs or Chinese kanji, the symbols could be used singly to illustrate a word, or several smaller symbols could be used in conjunction to form a whole word.

Even with the understanding we’ve gleaned from these discoveries, there is still much about the ancient Mayans that remains a mystery.  However, we do have some understanding of Mayan symbolism.  For instance, the jaguar was used to as a symbol for strength and divinity.  In Mayan mythology, the jaguar god would rule the underworld by night and during the day would prowl from the eastern sky to the west until dusk, when he returned to the underworld.  This meant that to the Mayans, the jaguar had dominion over the cosmic forces of day and night as well as the afterlife, giving him ultimate power.