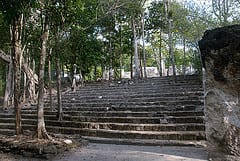 The Ancient Maya City and Protected Tropical Forests of Calakmul in Mexico’s Campeche state have been named “mixed natural and cultural” World Heritage Sites by UNESCO, according to the National Anthropology and History Institute.

“The city played a key role in the history of this region for more than 12 centuries and is characterized by well-preserved structures providing a vivid picture of life in an ancient Maya capital,” UNESCO said in a statement posted on its Web site.

The area added to the list is in the southern part of the Calakmul Biosphere Reserve and is considered the second-largest stretch of tropical forest in the Americas and the best protected, covering 723,000 hectares (1.78 million acres).