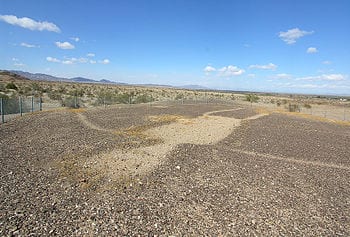 In the desert of the Palo Verde Valley near Blythe, California are hundreds of ancient geoglyphs.  These giant pieces of art were created by scraping away layers of darker rocks to reveal the lighter layer underneath.  No one is sure how old the geoglyphs are.  Many scholars attribute these depictions to the Mojave people, but Chemehuevi elder Alfredo Figueroa believes they are older.  He believes that the area is actually the lost homeland of the Aztecs, La Cuna de Aztlan.

But now these giant pieces of history are under threat of disappearing under industrial development.  As the area is more and more heavily developed for solar energy, many of the glyphs are in danger of being damaged or destroyed.   Figueroa and other are fighting not only to protect the glyphs, but the land around them.  “The intaglio is sacred, yes,” says Figueroa. “But so is the land around it. It’s all tied together.”