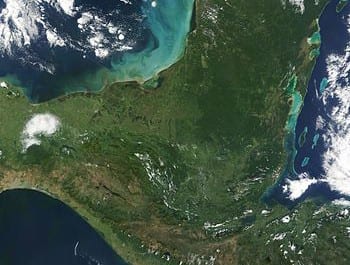 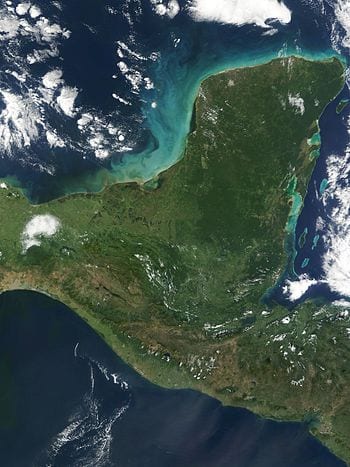 The Yucatán peninsula as seen from space

Deep in the jungles of Mexico, archaeologists have re-discovered two ancient Mayan cities.   The cities contain ruined pyramid temples, a gateway, a ball court, palace remains, altars, and stone monuments.  The architecture of the cities leads archaeologists to believe that they were built between 600 and 1000 C.E.

The cities were found in the south-eastern part of Campeche, a Mexican state on the Yucatan peninsula.  The area is thick with jungle vegetation and almost inaccessible, but researchers were able to locate the cities using aerial photography.  When anomalies were noticed in the thick vegetation, a team would be sent to investigate.

The city was originally found by American archaeologist Eric Von Euw in the 1970′s, but all attempts to relocate the city have been unsuccessful – until now.