You are here: Home / Aztlan Movement / Things We Have Today Thanks to the Ancient Aztecs 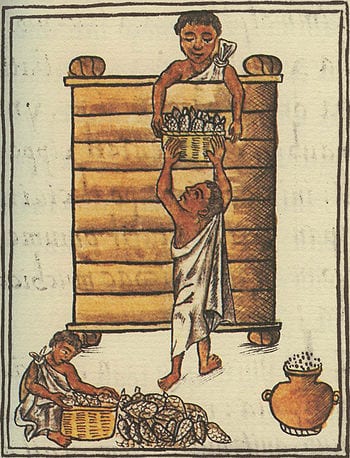 When the Spanish arrived in modern-day Mexico, they were amazed at the complexities of Aztec life.  The Aztecs lived in a completely different world with a variety of new food and treasures.  The conquistadors were impressed by the Aztecs’ accomplishments, and even today we still enjoy some parts of Aztec culture in our day-to-day lives.

1. Popcorn – Long before the Aztecs, the Zapotec people of Mexico and the Moche of Peru discovered popcorn.  But it was the Aztecs who were making popcorn when the Europeans descended on the New World.  The Spanish wrote about the Aztecs enjoying  “a kind of corn that bursts when parched and discloses its contents and makes itself look like a very white flower.”  And the rest of the world has enjoyed popcorn ever since.

2. Chocolate – Chocolate was valued highly in both the Aztec and Mayan culture – so much so that it was used as currency at time.  Ancient Mesoamericans enjoyed chocolate as a thick and spicy drink with the cacoa beans.  When the Spanish arrived and introduced sugar, chocolate quickly became a world-wide treasure.

3. Chewing gum – The Spanish conquistadors wrote about seeing people chew gum on the streets of Tenochtitlan, thanks to the Aztecs’ chicle trading routes.  These trading routes were unfortunately destroyed, but chewing gum was not forgotten and became popular again over three hundred and fifty years later.