You are here: Home / Aztlan Movement / Tulum: The Most Beautiful City of The Mayan World 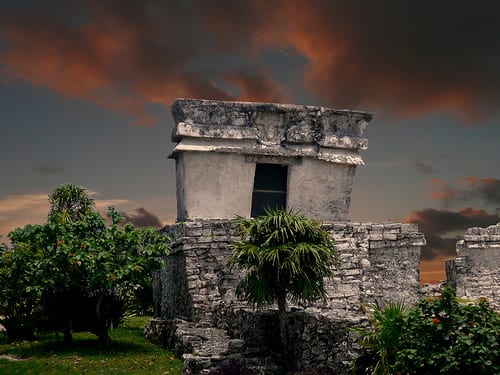 Considered the most beautiful of the Mayan ruins, Tulum is imprinted on a visitor’s mind as no other city from Mexico’s Indigenous past.

Tulum, like the Mayan city ruins of Cobá, El-Bekem and Chichén Itzá has been, to some extent, excavated and made accessible to tourists.

Known once as Zamá, for the Mayans it became the ‘City of Dawn’.

Built in honour of the sun, it edges the second longest coral reef in the Americas that a short distance from shore falls down dramatically to 469 m. Many consider it the most fascinating of the ancient Mayan cities found in the Yucatán Peninsula.

Tulum, which means ‘wall’, was a name later given to the site because it was the only Mayan city protected by a wall – 4.6 m high and 7 m wide, much of which still stands.

Perched on the highest point of Tulum’s cliff is El Castillo which was the Mayan temple dedicated to Kukulcan, the serpent god.

7) Some of the Mayan handicrafts offered in the Mayan Riviera are hipils, grayaberas, attractive tablecloths; and hand-woven wicker baskets, blankets and rugs.