You are here: Home / Aztlan Movement / What did Aztec children wear? 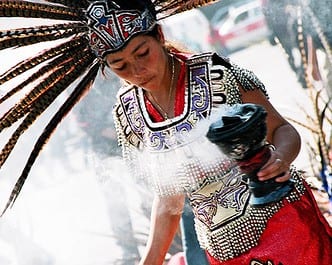 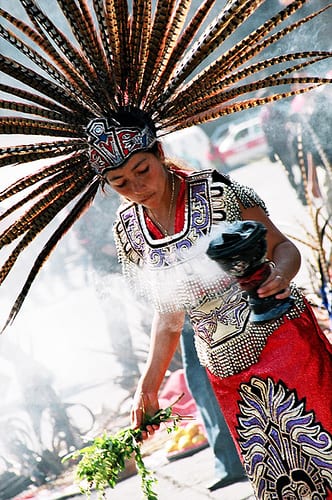 Its drawings of Aztec/Mexica children at different ages tell us much about their clothing – also about how little these changed as kids grew up.

You can tell the children are getting older thanks to the blue dots representing their ages.

It’s interesting to see at the same time the increasing rations given to children according to their age – shown by the tortillas or maize pancakes.

Already by the age of three the children’s clothing looked like their mum’s and dad’s.

‘The little boy wears a cape, tied on the same shoulder as his father, but he does not wear a loincloth; the little girl has a ‘huipilli’ [blouse] identical to her mother’s, but wears no skirt.

‘ The daughter is now wearing a longer, unhemmed skirt, while receiving instruction on the use of the spindle she crouches down to ground level, where so much of a woman’s work takes place Meanwhile, two boys, each clad only in a cape, are sent outside the family home to bring back light loads of needed materials Here the boys are using their capes to carry the burdens’.

Although some writers suggest sooner, most sources indicate that boys only started to wear a loincloth from the age of 13, entering into adolescence.