You are here: Home / Aztlan Development / What is the story behind the Aztlán Theme Park?

Aztlán is the legendary ancestral home of the Nahua peoples, one of the main cultural groups in Mesoamerica and, by extension, is the mythical homeland of the Aztec peoples.

Our extensive research suggests that Aztlan could have existed in the heart of Coachella Valley California. 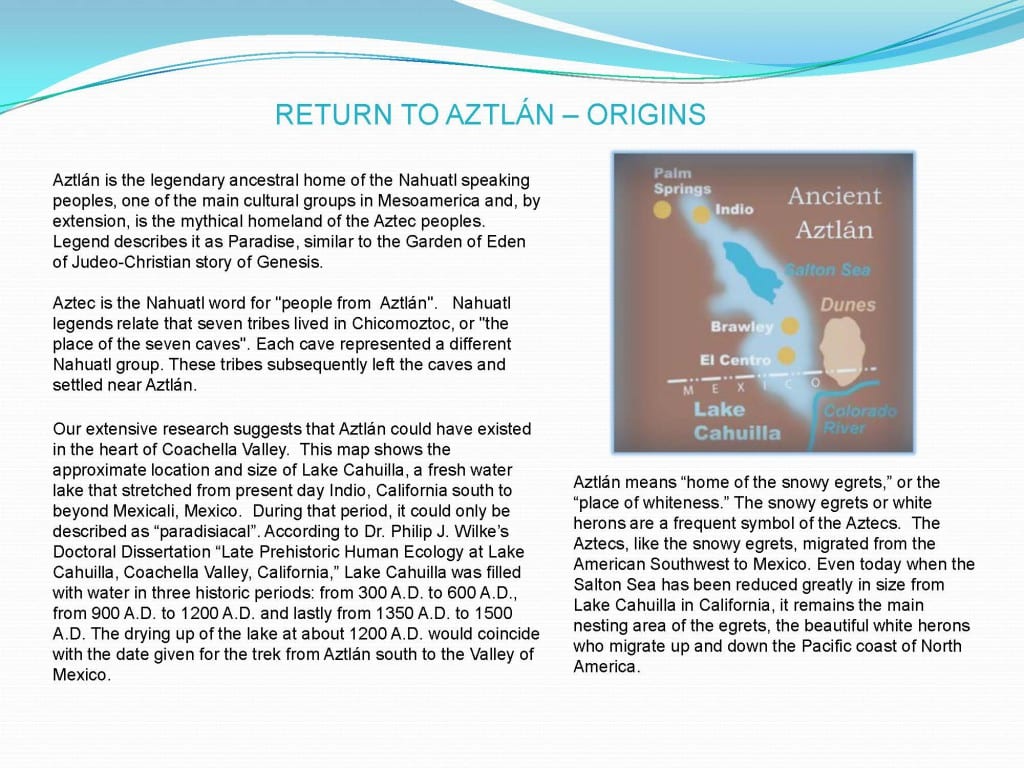 This information only just scratches the surface that suggests that the Cahuilla Tribes of Native Americans are predecessors to the great Aztec Empire, and the fabled Aztlan existed in Southern California.

The demographics overwhelming suggest that their descendants are returning home.  The demographics demonstrate that there is a tidal wave coming that will change the landscape dramatically by either political means or revolution . . . peaceful or otherwise. 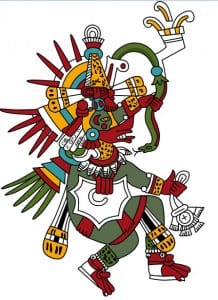 The Documentary IN SEARCH OF AZTLÁN confirms this information and more through a series of interviews. One of the interviews is of Dr. Carlos Velez-Ibañez who states:

The Codice Boturini basically lays out the trek from “the place of heron and reeds,” which is really what Aztlán basically means. The place that makes an awful lot of sense to me, because of the scale and size, and because of its intermittent dry and wet periods, is probably Lake Cahuilla, which is in the Coachella Valley. [It] is a huge fresh water lake. The myth lays out a series of transitions from Aztlán, showing, for example, the boat reed. And certainly this really coincides with the fact that Lake Cahuilla was, in fact, a place for both marshes and reeds and for herons, and thousands of water fowl. In a sense, leaving in a boat is symbolic of leaving the source of their livelihood. It’s highly likely that the lake bed dried up. So, symbolically, leaving in the boat, itself, gives you a kind of symbolic statement of how important the boat reed, the boat, itself, was, and the lake, itself. The reason they had to depart from there not because there was water, but–more than likely– because they lacked water. And that’s probably what the glyph also indicates, as well. So, you have, at least, this mythic tale of the Mexica, but not just the Mexica, because there are, in fact, indications that there was more than one migration. That, in fact, there were maybe five, six, seven migrations of populations from the same basic area. And this occurs over a period of a couple of hundred years. The Mexica, also called Chichimecas, intermarried intermittently, as they trekked south. So the original populations that may have left at Point “A” by the time they got to Meso-America, were already, in fact, mixed with other populations. So they weren’t the original tribal peoples.

Lake Cahuilla, itself, was a focus for many indigenous populations of that particular area. They more than likely didn’t have a complex social and political system, those kinds of polity in society that you usually associate with very complex systems. More than likely folks were, basically, hunting and gathering, but hunting for fish. And probably they had some kind of aquatic cultural system upon which they relied for fish–as well as animal life in the surrounding areas.  In fact, animals would come down and drink from the lake, itself. What’s interesting about Lake Cahuilla is that it ebbed and flowed over time. So that you have periods of one hundred and two hundred years in which the lake bed dries up totally, driving populations out into the Colorado delta, and certainly south. Then, it would fill up again, maybe forty, fifty years later. It takes a period of around fifty-two years for the lake bed to dry up completely. It’s during those periods, and certainly we have indications in 900, and later in 1250, that, in fact, this occurred. This coincides with the notion that, in fact, there were different Mexica, that is, there were different Chichimecas who also migrated from the North to the South. But certainly, the whole Lake Cahuilla area is extremely important, because it’s from the drying up and then the exiting of population that you can pretty well tie down between 900 and certainly 1250.

Research by Raymond Padilla states:  “Across the burning Sonora and Borrego deserts, into California over the Sierra Nevada Mountains to the Pacific Ocean and north along the coast, until one sees ‘the trees of the Gods’ . . . this is Aztlán!” (p. 327) If somehow one could find with reasonable certainty “the trees of the Gods”, perhaps that would give the location of the fabled Aztlán.

These are the prelude to the development of Aztlan Theme Park  in Coachella Valley. 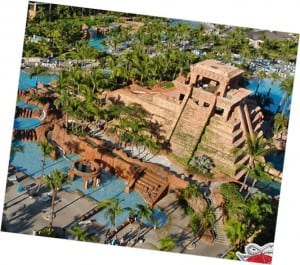 It will be based upon the film Montezuma Rising – Return to Aztlan.  The sets, soundstages, water features, Aztec Pyramid and Temple will become the bases of the theme park.

Because Tenochtitlan was built on a lake, and Aztlan appears to be built on Lake Cahuilla, he center piece of the theme park will be a water park with the Aztec Pyramid of the Sun that can be seen for miles from Interstate 10.

Each side of the Pyramid will be constructed for entertainment value that include:

Other sections of the Theme Park will be a Multi-Plex Cinema in the shape of a Mayan Temple, a Natural Hot Water Spa Resort, a Meso-American Cultural Museum, and Extreme Rides (roller coasters, etc.) area, Food Courts, Olvera Street with stores, food, and wandering Mariachis, a replication of Centro Histórico of Mexico City.

Every Latin county, will be represented in the monumental tribute to Hispanic culture and heritages. It is hope that Aztlan will become a symbol of unity for all Meso-Americans, and represents justice, harmony, and home.