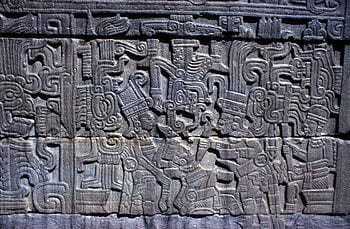 This stone carving from the South Ballcourt at the archaeological site of El Tajin, Veracruz, Mexico. (Photo credit: Wikipedia)

The Aztec ball game, known as ullamaliztli, was a top priority to ancient Mesoamericans.  Experts believe that the game dates back to the Olmec civilization and became a key part of the Aztec Empire.  Ullamaliztli wasn’t just a form of entertainment for the Aztecs – it had strong political and religious impacts as well.

When the Aztecs began a new settlement, there were two things that they did before any other development.  First, they built a shrine to the god Huitzilopochtli.  Then, they built a ullamaliztli ball court, known as the tlachtli or tlachco, next to it.  The ball court in Tenochtitlan was positioned between the palace and the temple, cluing modern archaeologists in on the importance this game held to the Aztec people.

The ball court was designed to mirror what the Aztecs believed was the ball court of the heavens, located in the underworld where the sun passes each night.  The game represented the battle between day and night.

Needless to say, the Aztecs valued ullamaliztli as a key part of their culture.