You are here: Home / Aztlan Movement / Deep in the Jungle, Lost Mayan Cities Are Discovered 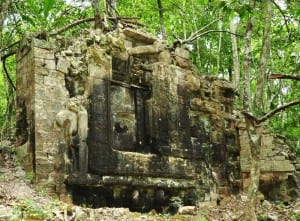 The facade at Lagunita, a recently discovered ancient Mayan city.

Two ancient Mayan cities featuring ball courts, pyramid, plazas, and, in one case, a spectacular entrance shaped like the open jaws of a monster, have been discovered in Mexico’s Yucatán peninsula.

An expedition lead by Ivan Sprajc of the Research Center of the Slovenian Academy of Sciences and Arts uncovered both cities in the Calakmul Biosphere Reserve, which was one of 29 culturally significant areas to receive United Nations Educational, Scientific and Cultural Organization World Heritage Site designation in June.

One of the cities, called Lagunita, had probably already been found by modern archaeologists including the American Eric Von Euw back in the 1970s.

A comparison between the city’s monuments and drawings of the lost Von Euw discovery revealed similar reliefs and hieroglyphics.

The cities are not the only major discovery of Mayan archaeological sites that have been made recently.